Heating and cooling costs typically account for more than half of your utility bill, according to the Department of Energy. If you ask us, that is just crazy. So what can you do about it? How about “HVAC Hypermiling”?

The term hypermiling was originally used in automotive circles to describe people who drove intelligently to achieve significantly higher fuel economy than rated by the Environmental Protection Agency (EPA). The practice involves well-known methods like coasting down hills or slowly accelerating from a stop, but hypermilers go to far more radical ends to decrease their fuel consumption.

So What is HVAC Hypermiling?

Heating, ventilation and air conditioning (HVAC) hypermiling is the process by which you take any means necessary to reduce the amount of time your HVAC runs, thereby reducing the amount of money you pay for heating and cooling. HVAC hypermiling can be achieved through a variety of methods but here are two ways to make it work for you.

This is one of the most simple and cost effective things you can do. Most houses in North Alabama have about 30% duct leakage. This means when you pay for $100 of cool air in the summer, only about $70 of it actually enters your house. Not cool. (Pun intended.)

Most North Alabama houses also have significant amounts of air leakage and are poorly insulated. You can do this stuff on your own with the right materials. And patience. Here is a short little guide from ENERGY STAR: http://www.energystar.gov/index.cfm?c=home_sealing.hm_improvement_seal_insulate

Of course you could pay a professional contractor to knock this out for you. It would set you back a few hundred bucks and a few hours. If you have a larger than average home, the cost may be a little over $1000. Even so, you’ll make your money back almost immediately.

OK, this is the fun part. My wife and I play this game each year. Really it is just me and she is along for the ride. When her frown gets a little too big I know it is time to give in and turn on the HVAC. Here’s what I do.

When we have cool nights in the house we use blankets and extra clothing to stay warm. The house will warm up during the day so the objective is to endure a few hours of colder than normal temperatures to keep the HVAC from coming on. If the house is still cool and it has warmed up outside, the windows come open. Fans are used to circulate air and cool the house if it gets too hot. I refuse to turn the HVAC on until the temperature gets to 78°F in the Spring or 66° in the Fall.

Ready to push your HVAC hypermiling a little further? Sometimes you’ll have a spike or a drop in temperature. Sometimes you’ll feel the humidity creep up a little too high. No worries. Run the HVAC. Then shut it off and hold out again.

Here’s an example. Let’s say it is Spring and the temperature is 80 degrees Fahrenheit in the house and you can feel a little humidity. You know that the next few days will be cool but just need to make it through this warm spell. Turn the HVAC on and cool your house below what you normally would. Say 70°F. Once the temperature hits 70°, shut of the HVAC. This will allow you a few degrees of warming once the HVAC turns off and before the sun sets. Once you make it though this specific day you know you have a few good days ahead again. The key is to use the HVAC system sparingly just to re-balance of sort.

One last note… Make sure to track your humidity as well. The last thing you want is to save a few bucks on HVAC costs only to let the humidity get so high your floors buckle.

Have fun saving and let us know some of your results! 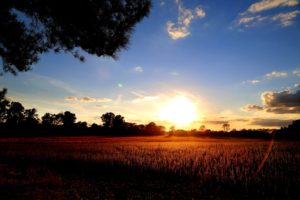 I met Bronwen outside her family home, as the sun sank into the fields, creating a peachy glow from the front porch steps.

Bronwen is inspired by her 83-year-old Grandmother and beloved mentor to live sustainably. Her dedication is evidenced by the 18 solar panels on the roof of the small bungalow where she resides. 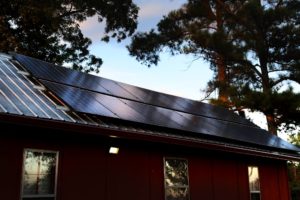 “This is an over 100-year-old house. It belonged to my great grandmother. This is also the Humphrey farm which has been in my family for about seven generations.”

When the family discussed adding solar power, Bronwen resolved to maintain the integrity of the original home, with its rustic character and small footprint. At just 1200 square feet and one bedroom, it is the perfect size for a single woman.

“I like the idea of making something of what you already have.” 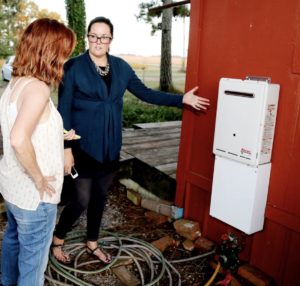 One feature Bronwen added was an on-demand water heater. As faucets pull water into the house, the system very quickly heats it to the 140 degree range. It is powered by propane (think ubiquitous silver bullet-shaped tank hugging the ground).

As the panels draw solar into the home, the sunshine is converted into DC (direct current) electricity through a method called photovoltaics (PV).  An inverter changes the DC power into AC (alternating current).

And off it goes, into a box that Bronwen calls the “heart” of the system. That system ferries current where needed. Any unused energy is stored in big battery packs. During overcast, rainy time periods, the “brain” pulls power from the batteries. If necessary, the system can toggle over to Bronwen’s public electrical source.

“The ‘Midnight Classic’ system is really kind of like the brains of what makes this guy work.” 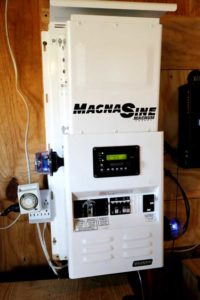 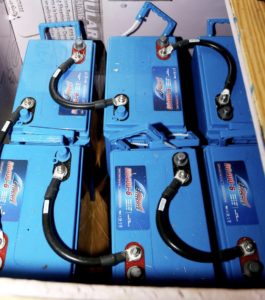 But that’s not all.  Inside her home, Bronwen uses energy-efficient appliances. She even purchased an energy efficient washer/dryer combination. But there was a downside: it took almost five hours to do one load of laundry. I’m not kidding.

“So I had to get rid of it and then this one didn’t fit in the space. So, it’s going back. Hopefully, something else is coming that will let me do laundry,” says Brownwen.

With the light from that magical orb long disappeared from the sky, we moved conversation indoors where we talked for several hours gathered around a very different kind of light. 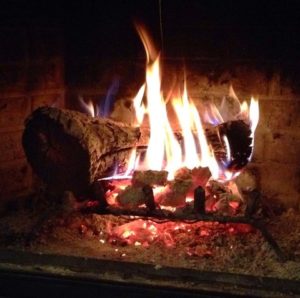 Bioenergy is energy that comes from renewable biological sources. These sources can be any form of organic matter that stores sunlight as chemical energy. Typical sources include manure, wood pulp, and sugarcane. Although, many more sources are available and currently being researched.

The oldest form of biofuel is wood, typically used for heat. Biofuel is just another name for bioenergy. The sources of biofuel (manure, wood pulp, etc) are called biomass, while the actual biofuel (or bioenergy) is the energy that is extracted from the biomass.

The great thing about bioenergy is that the biomass is typically a by-product of some other agricultural activity. While some crops (including corn, soybeans, and sugarcane) are being grown specifically for biofuel, in many cases are simply using byproducts and waste that would not otherwise be used. Rather than throwing wood pulp or manure on the ground to decompose, we are using that wood pulp to make fuel. The great thing about this is that there is little to no competition between the biofuel sources and needed food sources.

The methane gas that is produced by rotting garbage, human waste, excess crops, and even leftover vegetable oil can be converted to useable biofuel in the forms of ethanol and biodiesel. Not only can we produce fuel for vehicles but in some countries biogas has become a primary source of electricity.

In the US, the DOE is currently researching algae as a great source of bioenergy and biofuel. Oil extracted from algae is processed and converted to fuels that we could use to operate vehicles. Algae takes CO2 out of the atmosphere, which is good for the environment and can eventually reduce our reliance on non-renewable oil sources.

Biomass generates the same amount of energy as non-renewable sources, but because it is renewable it is easily replaced. Biomass creates net zero emissions as long as new plants are being grown to replace those that are being used.

But what about the price?

The DOE has been working to not only find new sources of biomass, but to reduce the cost of biofuels. The DOE reports that once biomass production reaches commercial levels the price will be equivalent to gasoline.

Are you Familiar with RideShare?

Everyone knows about carpooling, that’s been around for years, but what is RideShare?

RideShare is a unique program offered by Enterprise that allows you to reduce not only the cost of carpooling, but reduces the wear and tear on your vehicle.

The program is simple, you get a group of at least seven people who need to get from Point A to Point B. One person coordinates and signs up for RideShare, then Enterprise provides a vehicle to match the size of your group. They offer vehicles that carry anywhere from 7 to 15 passengers. The price is based on the miles traveled and the vehicle rented, and can be split among all the passengers. And, don’t worry the coordinator doesn’t have to do all the driving – everyone can still take turns! Insurance is also provided as part of the rental fee.

I know you are thinking “but won’t this be more expensive than just a regular car pool? No. Not really, when you split the cost over more people, reduce the wear and tear, and miles used on your own vehicles, you will likely be saving money!

This is basically a long-term rental so you keep the vehicle as long as you are participating in the program, or you can pass it around the group to whomever is driving that week.

So, why is Energy Alabama talking about this anyway?

It’s simple really. When people share the ride, fewer vehicles are on the road. That means you are using less energy and less gas, and it means that you are saving money. It’s all about sustainable energy baby!

Let’s do it! Whether you are a company looking to set up a RideShare program, or an individual ready to make a change in your morning commute, all you have to do put your group together, and visit vanpool.com or contact Rideshare Rep, Kelli Davis at 205-824-8557 • Kelli.Davis@ehi.com

She’ll help you select a vehicle and turn your morning commute from a boring solo run to a fun community activity that gives you some cred in the sustainable energy community.

Huntsville, AL – Through its International Awards Program, the Association of Energy Engineers, a nonprofit professional association of over 17,000 members, recognizes the important work being done in energy by individuals, organizations, agencies, and corporations. Energy Alabama CEO, Daniel Tait, is the winner of the 2015 International Young Energy Professional of the Year. The award will be presented September 30th at the 38th World Energy Engineering Congress in Orlando, Florida.

“The Association of Energy Engineers Huntsville Chapter gave me a scholarship more than 4 years ago that launched my career in energy,” says Daniel Tait. “To be recognized in this way from such a great group is truly humbling.”

Mr. Tait’s award is in part for his effort to transition Huntsville and Alabama to sustainable energy, serving as part of the leadership for the Association of Energy Engineers Huntsville Chapter, and volunteering with the Energy Huntsville Initiative since its inception.

Energy Alabama is accelerating the transition to sustainable, clean energy throughout Alabama. We do this by widely promoting sustainable energy as a feasible, state-wide goal by executing high-impact clean energy projects across the state, and by providing people with information and opportunities to help make clean energy choices. We work with policy makers, public agencies, local governments, educational institutions, utilities, business and civic leaders, and individuals to transform Alabama’s energy marketplace and beyond.

If you would like more information about this topic, please contact Daniel Tait by phone at (256) 303-7773 or by email at dtait@alcse.org.