Thank you to Boeing for your donation that will help Energy Alabama (aka Alabama Center for Sustainable Energy) continue to focus on STEM education in North Alabama.

A $15,000 donation to ALCSE from Boeing was earmarked for hands-on STEM education project in Madison county. 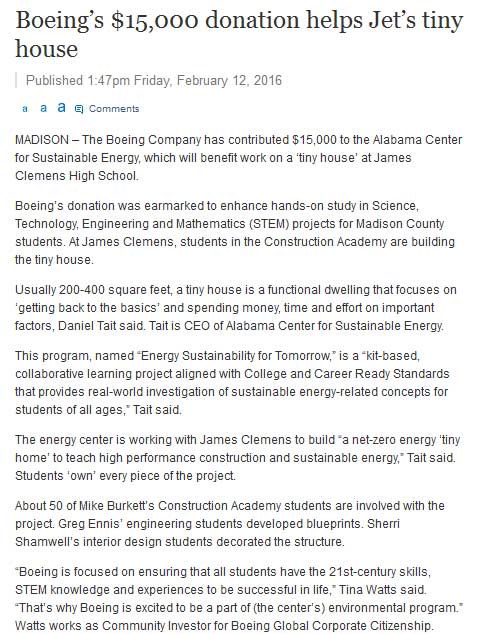 We don’t want you to get the wrong idea. Going solar is NOT the only way to save energy!

We know that many of you have seen amazing energy (and money) savings with some simple changes around your home or business. Heck, Randy at Avion Solutions saved over 41% on their energy bills by simply becoming aware of the tools at their disposal and learning how to use them.

Avion saved another 11% by changing out their light bulbs. Now that’s a simple change that anyone can do!  We’ve talked to a number of you who have seen massive savings just by converting your lighting to LED. Of course, you don’t have to go LED to save a massive amount of money. Even switching to CFL bulbs can save you 75% over traditional light bulbs. That being said, most LEDs are now just as cheap if not cheaper than CFLs!

So, that gave us an idea, why not share with you some simple energy-saving hacks that anyone can do, and that don’t require a massive investment.

Got more energy-saving hacks? Share them in the comments below. We want to hear what you do to cut your energy use and costs.

“Alternative energy is the Internet of twenty years ago – It’s in its infant stage. We just have to create the pathways to make it grow and be available to everyone.” – Bill Carswell

Bill Carswell’s career has taken plenty of interesting twists and turns: he’s been involved in space research with NASA, border security around the world, and project management education at Emery Riddle. Before all else, Bill is a Scientist. He’s currently the Principal Research Scientist at the University of Alabama in Huntsville and the Executive Director of the Energy Huntsville Initiative. 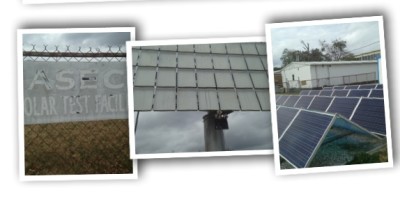 “There’s a large cottage industry of startups trying to tap into this energy revolution that’s going on and the problem with energy is its really expensive. You can’t just start a garage business with an app – I mean, this stuff is expensive! I’m putting together a resource that entrepreneurs can use so they don’t have to buy all the energy infrastructure. They can just focus on the element they want to build a product or a business around.”

HOW DOES IT WORK?

Entrepreneurs creating sustainable products can borrow Bill’s lab, complete with equipment and resources – solar panels, generators, high-tech batteries, smart meters, and business automation system. Startups have access to Bill’s extensive network of experts from UAH, ALCSE, and Energy Huntsville. The scientist himself is available for questioning too. Test your product in the safety of the lab over the course of one year (seasons make a difference) to get ready for market. Finally, pitch the finished product to the company or military institution that will buy it.

Bill’s laboratory is a veritable mecca for mad scientists and mad-scientist wannabes.

Purpose: Monitor a building’s energy use & move to backup source during peaks 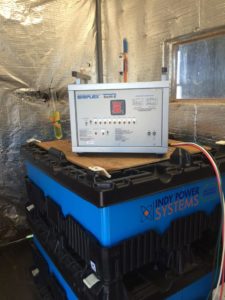 Purpose: Use electricity generated from diesel fuel and generators as efficiently as possible. 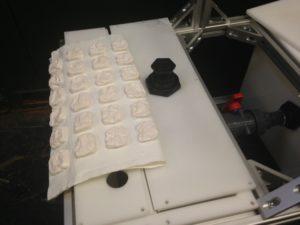 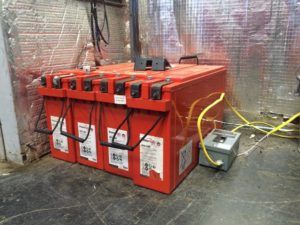 ..Not a smart meter, but they’re some pretty sexy batteries…

Key Players: ALCSE and Others…. 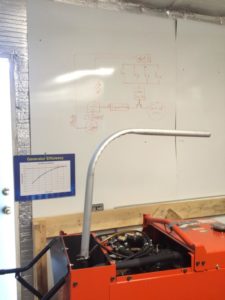 Drawings of a mad scientist, generator modified for laboratory use, and a generator efficiency curve developed from research

Have a sustainable product you need help with? Contact:

Why was this study done?

Good question and we’re glad you asked. TVA has operated a variety of distributed energy programs, mainly for solar, for the last few years. You may have heard of Green Power Providers or Generation Partners. Regardless, this study was completed to attempt an answer for one simple question.

How much money is distributed energy worth to TVA?

This question was brought to light because of three main factors, although many more exist.

What does this study say?

This study basically concludes that distributed energy, specifically solar, is worth 7.2 cents per kilowatt hour (kWh) to TVA. Average retail rates in the TVA territory are about 10 cents per kWh and TVA is currently paying 10 cents per kWh.

The study implies that solar is worth well less than what TVA currently pays for it. Almost 30% less.

How is that possible?

The best question you’ve asked! 7.2 cents per kWh doesn’t really tell the whole story. As you might imagine, there are a variety of things that must be factored in order to determine what solar or any other distributed generation is worth.

And here’s where the fun comes!

As they say, the devil is in the details.

What was factored in the 7.2 cents per kWh?

What are some things that weren’t factored in the 7.2 cents per kWh?

Summing it all up

There are ton of ways to slice and dice this report as well as the methodology. Most simply, it’s a good start. But just a start. By leaving out so many possible value streams of distributed energy, solar is getting short changed. However this report is only a first step in determining a fair market value for distributed energy 24/7/365. Additional work will be needed to understand and compensate solar, and other distributed energy sources, for the full value they bring to TVA.

Also don’t forget that you don’t need to connect to TVA’s grid to go solar. You can self consume! And as battery technology continues to get cheaper, you may be able to start storing as well.

To read the full DG-IV report for yourself, please visit: https://www.tva.gov/file_source/TVA/Site%20Content/Energy/Renewables/dgiv_document_october_2015-2.pdf

An educational program of the Alabama Center for Sustainable Energy has received a major boost from the Boeing Company.

CEO Daniel Tait said his nonprofit organization’s hands-on science, technology, engineering and math (STEM) program for Madison County students is the recipient of a $15,000 award from Boeing. The Energy Sustainability for Tomorrow initiative is a kit-based project aligned with College and Career Ready Standards that educates students of all ages about sustainable energy concepts.